The biggest gift one can give is HOPE.  The Billion Child Foundation gives HOPE.

In 2011 Fezile Dabi was a poorly performing district where only 46% of students gained a basic school leaving matriculation pass.

In 2012 principals of the worst performing schools attended the BCF Schools Centre of Excellence Programme and in the same year 2012 73 % of students gained a basic school leaving matriculation pass.

As each school gradually progressed towards becoming a centre of excellence the percentage of students gaining a basic school leaving matriculation increased to over 90%. More importantly by 2019 80% of the students gained a university or technical university admission pass!

In 2017, 2018 and 2019 Fezile Dabi was the top performing education district in South Africa despite most of the schools on the table below being situated in rural villages where poverty is endemic, unemployment is over 70%, and criminality, teenage pregnancy and substance abuse is rife. Each year it has beaten the education districts in Johannesburg and Cape Town with high performing government schools which were established over 100 years ago where the best teachers aspire to teach and which are well resourced by wealthy parents and alumni.

A traffic policeman, whose son attended one of the schools on the table below, told me that his son had considered dropping out of school in 2011 but as a result of a renaissance in teaching during 2011 had matriculated and had completed his first year at university training to become a land surveyor. He was so proud when he told me his story while tears ran down his face. 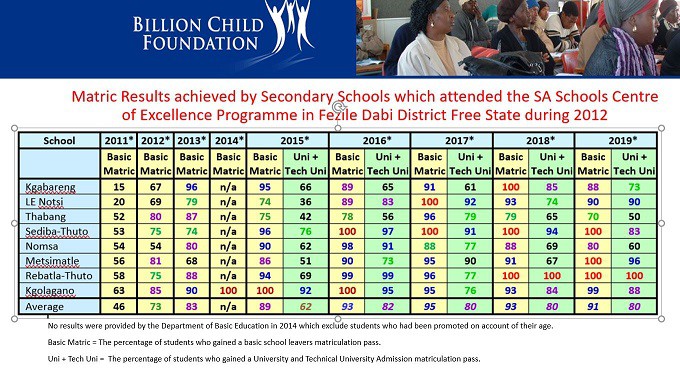